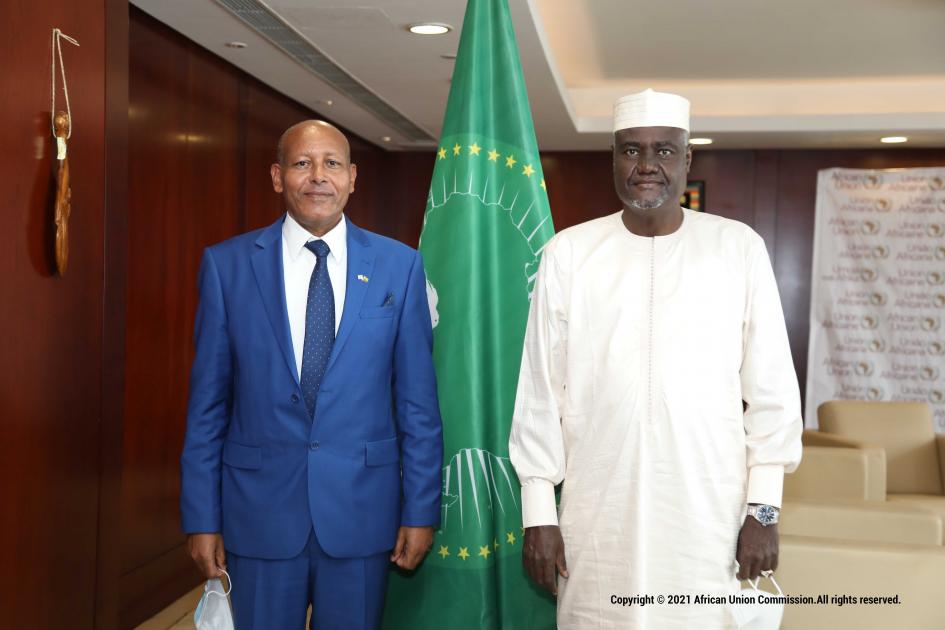 The Chairperson of the African Union Commission H.E. Moussa Faki Mahamat today received credentials from H.E. Aleli Admasu, Ambassador of the State of Israel to Ethiopia, Burundi & Chad during which the long-standing issue of the Palestine-Israeli conflict was also discussed.
The Chairperson stated that the conflict between the State of Palestine and Israel has been a cause of great concern for over seventy years with various regional and international actors having participated in the search for a peace between the two nations; and noted that a lasting solution was required to ensure the co-existence of both nations and to allow their people to live in a state of peace and stability. He emphasised that the path towards long lasting peace and stability requires that the peace process and the solutions sought must not only be acceptable, but must guarantee the rights of all parties
The Chairperson reiterated that in the almost sixty-year history of Africa’s continental
organisation, from its formation as the Organization of African Unity and re-launch as the African Union, the Union has been very clear on it position that in the issue of Palestine and Israel, a Two-State Solution is necessary for a peaceful co-existence.
On his part the, Ambassador Admasu welcomed the opportunity to meet with the Chairperson of the AU Commission as it marked the beginning of a new phase in building Israel’s relationship with the region at a continental level. He noted that whereas Israel has bilateral relationships with several African countries, the engagement with African states through the African Union was key towards building the multilateralism that is required for promoting continental initiatives earmarked under Africa’s Agenda 2063. He commended the African Union for the role it plays in promoting Africa’s peace and security agenda and advocating for conflicting parties to engage in discussions and partnerships that will promote a stable environment free from conflict.
Ambassador Admasu extended an invitation from the State of Israel to the Chairperson of the AUC to visit the country noting that the State of Israel would welcome the opportunity host a meeting between the Chairperson and its leaders

For information about the the story and AU please visit Home | African Union (au.int)