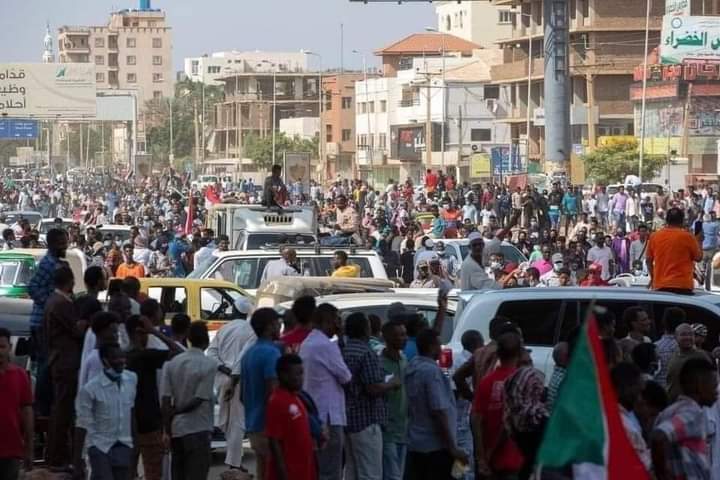 It’s exactly one year out since Gen. Alburhan the chairman of Sudan’s transitional council announced the government change that the people named a complete military coup.

Today thousands of Sudanese people took to the street refusing the military rule and demanding a full civilian government to be formed, political parties have been hustling to reach an agreement and bring about change to a country that has been hostile before during and after the Islamic backed national congress party led by president Omer Hassan Ahmed Albashir then ousted for his thirty years of familiar governing system, yet the people of Sudan did not meet the demands they have revolted for, some individuals expressed anger and depression over the performance of the political parties who participated in the civilian government formed and led by Dr. Abdalla Hamdook before his civilian transitional government was entirely changed by military on 25th October 2021 , being detained and most of his cabinet members were arrested , Hamdook reached to a political agreement with Gen. AL Burhan but that agreement resulted his public resignation.

The resistance committees across the country have mobilized the people to marsh towards the palace on 25th October hopping to remove the military and form a technocrat government from civilians who are not in favor for any political party or armed movement, they were calling for a complete civilian rule and they stick to the three No(s) (rejections) and those rejections are no partnership, no negotiation and no compromise, but someone may ask what are these three rejections for?

No negotiation , the revolutionary believe that the military council lost its legitimacy after 25th October 2021 by announcing military rule and dissolving the transitional government that brought by Juba peace agreement and that the military is not qualified to lead the country as Sudan had experienced thirty years of imperialistic and totalitarian regime,.

No partnership: overt roughing a civilian prime minster and replace his government with a military one has aggravated the revolutionaries and they think that Gen, AL Burhan will not maintain any partnership as he seems very interested in taking the lead to the next election according to the protesters.

No compromise: seeing their peers killed every day, the protesters will consider no compromise with the military as they seek to take who so ever involved in killing revolutionary before justice, this motive is an important element and not compromised one by any means said the protesters of 25th October 2022 remembering the last year military coup

Looking at the current situations the international community views it as fragile and on verge to a humanitarian collapse, the united nations integrated transition assistance mission in Sudan (UNITAMS) was closely observing and mediating between the military, the civilians and the resistance committees across the country but reached to positive resolution the political disagreements that shown hope to the military to insist of continuing to rule because of the political vacuum as they claim that they will not handover authority only to a government elected by the people.