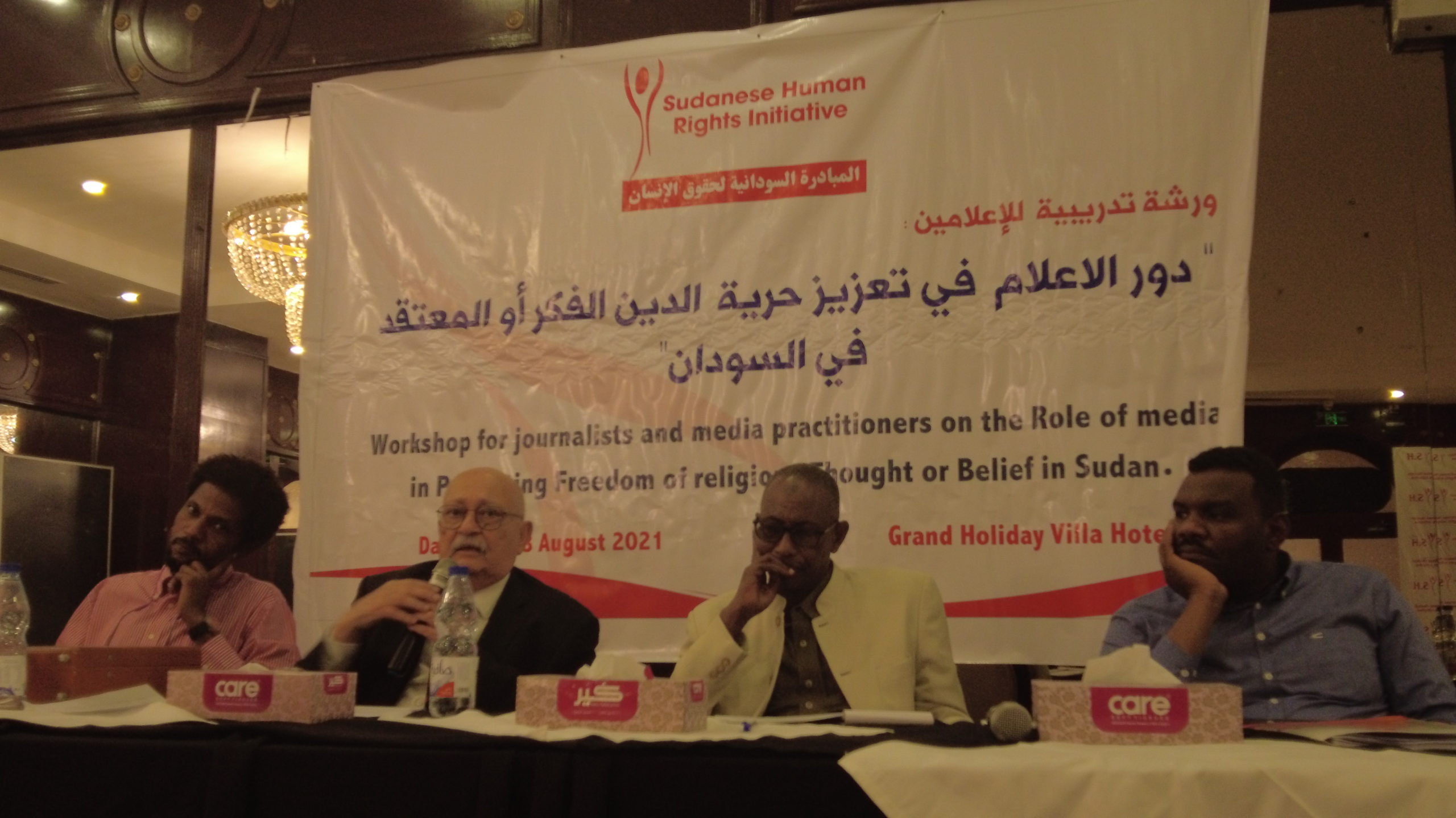 Sudanese Human Rights Initiative organized a training workshop for journalists and media practitioners on (The role of media in promoting freedom of religion, thought or or belief in Sudan

Sudanese human rights initiative (SHRI) a workshop for journalists and media professionals on the role of media in promoting freedom of religion in different aspects, thoughts believes and freedom of choice to religion , the first day brought various speakers from different walks of religious diversity in Sudan;

Dr. Nabeel Adeeb a prominent Sudanese law professional and a legislator, he talked about religious equity based on the country’s resources of national legislation , he has explained comprehensively how religious misinterpretation affected the accommodation of multi-religious coexistence, declaiming Sudan as Islamic state left some of the religious minorities out of the nation legislations, ignoring the diversity in Sudan led to continuous disagreement among the believers of the two largest religions practiced in Sudan which are The Islam and Christianity, after the separation of South Sudan , the Sudanese Muslim extremists expected to have fully Islamic country despite the facts that the most of the Christians are from South Sudan therefore he said the country should not have any religion is the source of legislation or governance.

Hate speech was the main topic as all speakers focused on how can journalists fight hate speech and promote peace and acceptance to all citizens as one , its has been addressed by guest speaker Mr. Alsir Alsayed former national Radio and TV personnel that hate speech was promoted by the radio and the tv cooperation itself, he added sayin that recently the national tv started to air Christian programs that means there is a drastic change has happened after December revolution as it has never been the same at the time of the ousted regime.

Media and journalist trainer Mr. Khalid Masa delivered an academic presentation on hate speech through media that journalists and media professionals themselves my have promoted hate speech Using media instrument as a tool to fight hate speech , the trainer covered practical steps to create informative story free from hate and colorism

In reference to day two started by the first work paper presented by Dr. Mohammed Mustafa on Jewish in Sudan before and after the independent , the paper discussed the existence of the Jewish in Sudan historically and socially as well, according to the paper presented by the speaker that Jewish were and are still par of Sudanese communities but they are discriminated in different walks of life ,they are not given full right of religion practice , choice of faith and belief , the workshop covered different topics that can serve the agendas of the program and pave the way for the next similar project